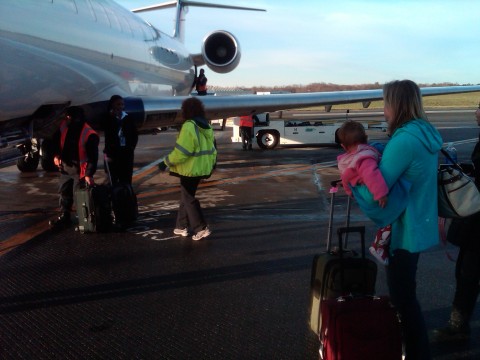 After the family boarded, their children, ages 3 and 1 1/2, began “crying, screaming and hitting,” according to Christopher Sueling. His wife, Melissa, tried to calm her baby by nursing her, but it didn’t work.

“The flight attendants were just standing there, looking pissed off,” he says.

The jet taxied out to the runway, but then stopped and returned to the gate. The Suelings were told to get off the plane and that they needed to write to Delta if they wanted their money back. They even took a snapshot (see image, above) to document their ejection.

I’m the father of three young children, so I sympathize with the Suelings. I think Delta probably overreacted to the unruly family, and it certainly didn’t move quickly enough when they asked for a refund. I helped things along by contacting Delta on their behalf after they wrote to me last year asking for help, and they were eventually reimbursed.

But there are other passengers — and I think it’s probably safe to say that some air travelers on the Suelings’ outbound flight felt this way — who were relieved that the flight attendants showed them the door.

Why? Because they combined two of the least desirable qualities in a seatmate, according to many travelers I hear from: yelling kids and nursing moms.

I started giving the subject of unwanted seatmates serious thought after a recent story on XL passengers went viral in November. My editor asked me if there were other types of air travelers people avoided, and if we could try to identify the biggest offenders, as a public service to our readers.

The gadget guy. Passengers who can’t find the “off” switch on their iPhone (think Alec Baldwin) represent a special kind of annoyance to their fellow travelers. Not only do they often aggressively defend their right to use the electronics, even when federal law prohibits it, but they also have a tendency to be in your face about it. They’re less likely to follow the instructions of a crewmember and they show a complete disregard for the safety of others by operating their electronics when it could interfere with the aircraft’s critical systems.

The screaming infant. Noisy kids, and particularly very young children whose high-pitched voices reverberate throughout the cabin, rank high on every air traveler’s “most annoying” list. Here’s a little-known fact: When you’re a new parent, you develop the ability to block your baby’s incessant screams, so you basically can tune the child out whenever you want. The rest of your fellow passengers aren’t so lucky. The ear-piercing, glass-shattering screams have everyone else reaching for their earplugs. It’s highly irritating.

The barking lapdog. Pets on planes is a never-ending source of controversy, and with good reason. Pet owners, who insist they have a right to take Fluffy or Fido with them wherever they go, are clashing with travelers who claim they have allergies to pet dander, but are often just ticked off that they have to endure the sounds of a yapping, caged canine for the duration of a flight.

The oversize passenger. I could probably write about XL air travelers that take up more than one seat every week, because there are such strong opinions on both sides of the aisle. On one side, the passengers who are pushed out of their seat by big travelers who need to raise the armrests in order to sit down; on the other side, large passengers who believe their girth should be treated like a disability. In a way, both are victims — and both are annoyed by their critics.

The breastfeeding mom. I think most of us would be lying if we said we didn’t experience at least some level of discomfort at being seated next to a nursing mom. It’s not necessarily her baby, which we fear could projectile-burp the contents of its stomach on us, but the fact that she’ll probably expose herself at some point during the flight. There have been incidents involving breastfeeding moms, including one lawsuit against Delta by a mother who was kicked off a Delta flight a few years ago (sound familiar?).

The smelly or chatty adult. If you’ve ever been stuck next to the proselytizer pitching anything from a religion to insurance, you know how unbearable the flight can be. I’ve been there. But sometimes, a passenger doesn’t have to say anything in order to irritate you. She could have slathered half a bottle of retch-inducing gardenia perfume on her, pre-flight; or he could have simply refused to bathe the month before his trip, or downed a quart of vodka and inhaled a pack of unfiltered cigarettes to calm the nerves.

Bedbugs. Maybe the worst seatmates are the ones you can’t see. Here’s a woman on another Delta flight who says she was eaten by bedbugs on a recent flight. Delta again, huh? I would add to that list insects or rodents or — God forbid — snakes that come aboard and pester you during your trip. Highly annoying.

Hard decision, isn’t it? Air travelers are so easily annoyed by one another, and don’t even get me started with the things flight attendants do. But that’s another story.

Time to vote, my friends.