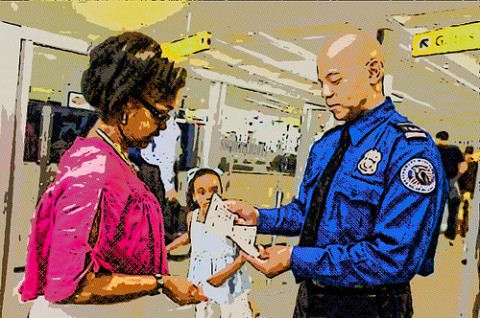 It’s been a wild week, TSA Watchers. There’s so much we could talk about, from baby pat-downs to food hysteria and grounded imams.

But let’s start where we left off last Saturday, with an agency leveraging Osama Bin Laden’s long-overdue demise to freak out the American traveling public.

Homeland Secretary Janet Napolitano decided to make it official this week by giving outgoing CBS News anchor Katie Couric an exclusive interview in which she said absolutely nothing but amped up her rhetoric.

The baseline has gone up. You know, when the color coded system was invented, the baseline was still, it was a pre-9/11 baseline. But terrorism threats continue to grow, they continue to evolve and so the actual baseline is elevated.

I’m not really sure what that means, but it sounded so good against the backdrop of the gleaming Transportation Security Operations Center, with its macabre memorial made of a World Trade Center girder, Pentagon stone, and a fragment from the wreckage of Flight 93.

And the TSA was clearly proud of spinning the story that it even posted something on its blog about the interview with the failed news anchor.

I’m guessing some of you might want to know a little more about it. I know it piques my interest when I see an operations center full of computers and giant displays. It makes me want to push buttons and stuff.

Did he just say “push buttons and stuff?” He sure did.

There are at least two reasons why Napolitano and the likes of Blogger Bob were out pounding the pavement this week. One is that in the face of no apparent threat against America’s transportation systems, it justifies the $56 billion-a-year agency’s existence. And two, our elected representatives have taken some important steps toward curbing Napolitano’s federal security apparatus.

Earlier this week, House Republicans trimmed $76 million from the 2012 Homeland Security budget that was supposed to fund the purchase of 275 full-body scanners. House Appropriations Chairman Hal Rogers (R-Ky.) suggested the scanners were “unnecessary and wasteful,” and that the government had a responsibility to rein in the TSA.

But that’s the least of the agency’s problems. This week, the Texas legislature passed a law that would make it a criminal act for security personnel to touch a person’s private areas without probable cause as a condition of travel or as a condition of entry into a public place. At least eight other states, including Alaska, Washington, New Hampshire, and Pennsylvania, also have legislation pending to protect travelers’ from groping TSA agents.

Groping innocent citizens does little to enhance security but it does much to reduce our freedom and dignity. I am very thankful that members of both parties have joined together to defend our citizens’ dignity against the TSA’s egregious screening methods.

It’s an interesting piece of legislation, although I’m a little troubled that it fails to adequately define “probable cause.” But it certainly sends a message to the feds: Keep your hands off us.

They need to hear that. (Update: They heard it, but they plan to ignore it.)

All in all, it’s been a pretty awful week for our federal screeners — even if you discount the lawmaking troubles. On Monday, they had that whole unpleasantness with the baby pat-down. Then a dust-up over baby food (yes, baby food). And, of course, the imams kicked off their flights. (Although the latter wasn’t a TSA issue per se, it couldn’t have happened without the paranoid influence of the agency on the traveling public.)

Look, at the end of the day, we’re all playing for the same team. We don’t want another plane blown up, and we certainly don’t want a train or a bridge to be incinerated by a terrorist bomb. But here’s where reasonable people differ: Many feel that security can be achieved without trampling on our civil rights and dignity.

I have colleagues, some of whom I respect a great deal, who say we should just suck it up and comply with the TSA. After all, we’re at war.

But they are wrong.

It is precisely during a war that our character matters the most. Do we torture, grope, and scan — or do we find a way to achieve our security objectives in a way that shows we are better than the terrorists?

I think we can do better. I think we deserve better.