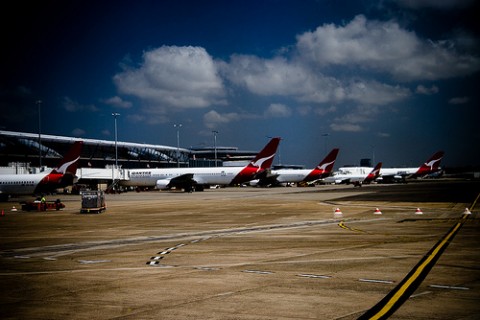 Editor’s note: This is the first in a series of posts about the Transportation Department’s sweeping new airline passenger protection rules, which I wrote about yesterday on this site and in a special edition of my MSNBC column. Please take a moment to comment on these proposed rules at Regulationroom.org. The future of air travel depends on it.

There may be reason why the first order of business in the Transportation Department’s new rulemaking on passenger rights addresses the problem of tarmac delays. These rare but completely needless ground delays have been a political hotbutton, leading to previous action by the department that effectively bans airlines from keeping passengers parked on a taxiway for more than three hours.

Here’s what the DOT required in its original rule:

1) An assurance that, for domestic flights, the U.S. carrier will not permit an aircraft at a medium or large hub-airport to remain on the tarmac for more than three hours unless the pilot-in-command determines there is a safety-related or security-related impediment to deplaning passengers, or Air Traffic Control advises the pilot-in-command that returning to the gate or permitting passengers to disembark elsewhere would significantly disrupt airport operations.

2) For international flights that depart from or arrive at a U.S. airport, an assurance that the U.S. carrier will not permit an aircraft to remain on the tarmac for more than a set number of hours, as determined by the carrier in its plan, before allowing passengers to deplane, unless the pilot-in-command determines there is a safety-related or security-related reason precluding the aircraft from doing so, or Air Traffic Control advises the pilot-in-command that returning to the gate or permitting passengers to disembark elsewhere would significantly disrupt airport operations.

3) For all flights, an assurance that the U.S. carrier will provide adequate food and potable water no later than two hours after the aircraft leaves the gate (in the case of a departure) or touches down (in the case of an arrival) if the aircraft remains on the tarmac, unless the pilot-in-command determines that safety or security requirements preclude such service.

4) For all flights, an assurance of operable lavatory facilities, as well as adequate medical attention if needed, while the aircraft remains on the tarmac.

5) An assurance of sufficient resources to implement the plan.

The final rule also requires U.S. carriers to retain for two years the following information on any tarmac delay that lasts at least three hours: the length of the delay, the specific cause of the delay, and the steps taken to minimize hardships for passengers (including providing food and water, maintaining lavatories, and providing medical assistance); whether the flight ultimately took off (in the case of a departure delay or diversion) or returned to the gate; and an explanation for any tarmac delay that exceeded three hours, including why the aircraft did not return to the gate by the three-hour mark.

The new rule tries to strengthen protections by making changes in four areas:

2) Increasing the number of airports at which carriers must adhere to their plans to include U.S. small and non-hub airports.

4) Requiring any foreign air carrier that operates scheduled passenger or public charter service to and from the U.S. using any aircraft originally designed to have a passenger capacity of 30 or more passenger seats to adopt a tarmac delay contingency plan that includes minimum assurances identical to those currently required of U.S. carriers for the latter’s international flights.

The foreign carriers would be held to the most of the same standards as U.S. airlines.

Why is the change necessary? According to the proposed rulemaking,

We are proposing these regulations because the Department believes that it is important to ensure that passengers on all international flights to and from the United States are afforded protection from unreasonably lengthy tarmac delays.

As is the case under the existing rule for international flights of covered U.S. carriers, at this time, we intend to allow foreign carriers to develop and implement a contingency plan for lengthy tarmac delays that has more flexible requirements than those that apply to domestic flights with regard to the time limit to deplane passengers.

Is this necessary? In a preliminary regulatory analysis (PDF) compiled by Econometrica, the answer is a resounding “yes.”

[Some] 44 percent of all passengers on international flights departing from the United States in 2008 flew on foreign carriers. Many of these flights departed from large-hub airports that have a history of problems with lengthy tarmac delays. Consequently, passengers who fly on foreign carriers lack the same minimum guarantee-of-service provision in the event of a lengthy tarmac delay that is currently afforded to travelers to and from the same destinations on covered U.S. carriers.

The Department has also given consideration to passengers’ frustration with lack of communication by carrier personnel about the reasons a flight is experiencing a long tarmac delay. It does not seem unreasonable or unduly burdensome to require carriers to address this issue and verbally inform passengers as to the flight’s operational status on a regular basis during a lengthy tarmac delay. As such, the Department is proposing a rule requiring carriers to announce to passengers on covered flights every 30 minutes the reasons for the delay, and/or the operational status of the flight.

I have long maintained that although tarmac delays are politically important, they are irrelevant to most passengers. I still feel that way. However, having these new rules can’t hurt.

And if you’re ever unfortunate enough to be one of the few who is stuck in a parked plane, you’ll be glad for these tarmac delay regulations.

I’ve written this series of posts in order to help you understand the Transportation Department’s proposed rules and offer the most informed feedback during its commenting period. Please take a moment to read them and then tell the government what you think at Regulationroom.org.

• Part 1: New tarmac delay contingency plans — what’s in it for you?

• Part 4: Government to airlines: Put it in the contract!

• Part 6: Everything you need to know about the new denied boarding compensation rules

• Part 8: Transportation Department wants airlines to reveal all fees and an airfare — or two

• Part 9: New rule: No more price increases after you buy a ticket

• Part 12: The hard facts about the peanuts-on-a-plane rule everyone’s talking about

If you have any feedback on this series, please send me an email. And thanks for reading.