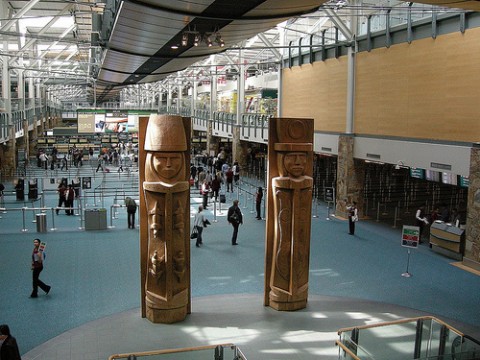 When you buy an “illegal” airline ticket — which is to say, a ticket that violates a carrier’s booking rules — the penalties can be severe. It’s not uncommon to have your frequent flier account suspended or for your travel agent to receive a debit memo, demanding the fare difference.

But what happens when your airline books an unlawful ticket?

His itinerary took him from Vancouver to Chicago and then from Chicago to Halifax. But he was denied boarding on the Chicago-to-Halifax leg because it was determined that the flight would have violated federal law.

While this protected the airline from breaking international cabotoge laws, I was unable to travel on the itinerary I was sold.

I had a seat on the plane, but was unable to use it. This is quite comparable to an involuntary denied boarding and should be compensated accordingly.

So what was the problem? Cabotage laws prevent an airline from offering service from one point in one country to another one in the same country using another country as a stopover point. Laufer was told that because he started and ended his trip in Canada, but had a stopover in Chicago, his itinerary was illegal. (Note: I have updated this post to clarify his routing.)

He asked a manager to address the problem, which delayed his return to Halifax by almost an entire day. Continental offered a $150 for what it called a “booking error.”

Had the government caught Continental in the act, it would have had to pay much more for the infraction.

Laufer thinks he’s entitled to more than a voucher.

This instance was not a standard misconnection error or the like, but an illegal itinerary issued by the airline that caused me to take 2 extra flights and a 20 hour delay. I would equate this situation with an involuntary denied boarding.

This is a fascinating case. The airline sees this as little more than an inconvenience as the result of a booking system error. It sees this as delay that’s beyond its control, like a weather delay or air traffic control delay.

Laufer begs to differ. Continental’s booking system — which is being merged with United Airlines’ — has elaborate controls designed to protect its revenues. It cracks down on travel agents who book tickets it says are “illegal” on a regular basis. Can’t it also ensure its own tickets are legal?

Then again, Continental could have told Laufer “sorry” and offered him nothing. I don’t see any rules in its own contract of carriage — the legal agreement between it and a passenger — that provide compensation for an illegal ticket.

Indeed, Continental got him from point “A” to point “B” in accordance with its contract, didn’t it?