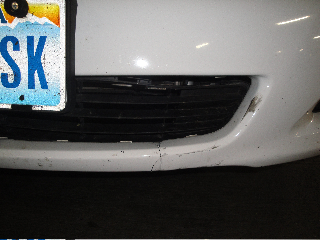 Mary Dampier’s rental from Alamo was problem-free until she returned the vehicle to San Francisco International Airport. That’s when she was drawn into what she says is a frivolous claim that has ended with Enterprise (which owns Alamo) threatening her with a collection agency, legal action and being blacklisted from renting with the company again.

The problem? The cracked bumper (above) which Dampier says was pre-existing. Alamo wants $481 for repairs, but Dampier insists she didn’t do it.

Will Alamo sue her for $481? Probably not. Will it report her to a collections agency? It could, but she has certain rights that could render the collection-agency route ineffective. And being blacklisted would be a problem, but Dampier has no intention of renting from Enterprise again.

So what’s the issue here? She’s worried about her credit score. But mostly, Dampier doesn’t like being accused of something she didn’t do, and wants me to step in to clear her name.

Before letting you vote on whether I should help, let’s hear her side of the story:

I rented the car from Alamo from Oct. 1 to 3. I drove it 81 miles total. It was parked most of that time and the vehicle was definitely not damaged during my rental.

When I arrived in San Francisco, I checked in at the rental desk at SFO. I was directed to select any of the cars in a certain row in the dimly-lit, multi-level parking lot. There was no attendant to assist me. The keys were in the car. I selected the only Toyota.

I walked around the car for a visual inspection and noticed that it was a slightly dirty in front. But I saw no dents or dings. I considered having them run it through the car wash again (I’ve done this before) but I had an appointment to get to.

I drove the car 81 miles during weekend rental period — mostly from the airport, to my Oakland appointment, Fort Mason, and back to the airport. I parked carefully, pulling in facing a wall or building. No one could have impacted the car from the front during the time it was parked.

When I drove it, I didn’t run over or hit anything. Actually, it was a pleasant driving experience.

When I returned it to the airport, the agent walked toward the car from the front and said to me as he approached, “What did you hit with the car?” I thought he was joking.

He pointed out what appeared to be a crack in the lower portion of the front grill. I didn’t see it right away – I had to get down low to view it. It would have been easily missed in the dim parking garage where I picked it up. I told him I’d parked it safely during the time I had it.

But he said no, suggesting I’d run over a pallet, or ladder, or some other hazard in the road, because, he said, that’s what causes this type of damage.

I disputed the damage on the spot, telling him I didn’t hit a thing and that this damage had to have been pre-existing. Thinking about it now, this car had Utah plates and 15,615 miles on it … lots of opportunity for someone else to have done the damage I’m being blamed for.

What followed was the predictable flurry of phone calls and letters between Dampier and Alamo’s damage recovery unit, with her insisting she’d done nothing wrong and the car rental company insisting she was responsible.

It isn’t clear to me that Alamo showed her conclusive evidence that the car was damaged on her watch. As far as I can tell, it only sent her the photo showing what appears to be a cracked bumper, which doesn’t really prove anything.

Dampier made some critical errors during her rental. She should have insisted the car be examined by an Alamo employee before renting it. She should have documented the problem bumper and asked an associate to acknowledge the pre-existing condition. Even if she failed to do all of the above, she should have spoken with a manager after the damage was noticed on her return, to fully explain her situation.

If Alamo didn’t document the damage on her vehicle before her rental, then it is well within its rights to ask her to pay. However, threats of legal action, reporting her to a collection agency and blacklisting her, are a little bit over-the-top. A vast majority of car rental customers are eager to pay for real damage to a car and are offended when a company becomes aggressive.

Indeed, in a recent interview, Enterprise’s vice president for corporate loss control, Roger Van Horn, suggested this is not how his company normally handles damage claims.

On rare occasions, if we reach an impasse with a customer, we refer a claim to an outside collection agency for further handling – but only as a last resort. We prefer to work with our customers directly so that they are comfortable with the process and continue to do business with us.

A poll of nearly 800 readers finds a majority (73 percent) want me to mediate the case. 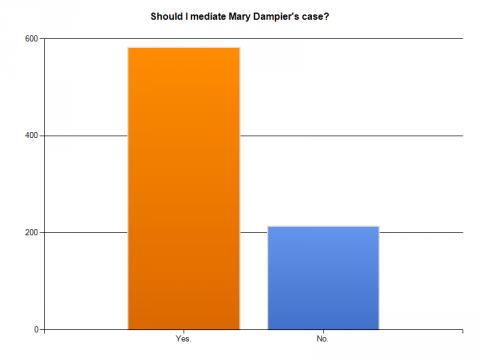 Update (12/1): I just received word from Enterprise that the case has been dropped.