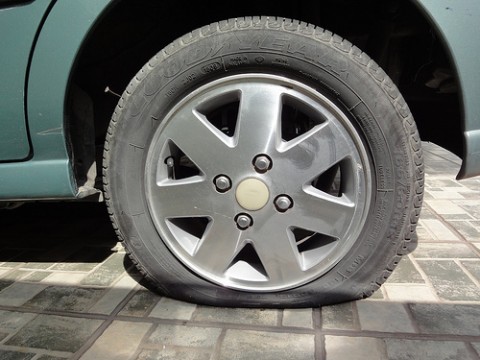 Ana de Pascht’s airline ticket from Albany to Raleigh/Durham came with all of the usual restrictions: nonrefundable, nontransferable and non-changeable without paying a hefty fee.

But it wasn’t the usual flying experience. On her way to Albany, she got a flat tire.

“I called US Airways and asked what could be done,” she says. “I was told that I had to buy a new ticket and also pay a change fee of $150 — a total of $273 — if I wished to travel on the next flight out. I did question the agent about any other ways to avoid paying all that money and was told that was my only option if I wished to fly.”

Interestingly, most airlines used to have what’s called a flat-tire rule that allowed airline staff to rebook passengers like her on the next flight at no extra charge. But in an era of “no waivers, no favors” the loophole was quietly closed.

Well, sort of. Ticket agents still have a lot of flexibility in dealing with passengers who can’t make a flight, and US Airways could have bent its rules. It chose not to.

De Pascht wants me to intervene to recover the $273 she believes US Airways should have never charged her. She says she felt she had no choice but to pay for a new flight, and tried to appeal the decision to charge her once she arrived at the airport.

I spoke to a supervisor at the check-in desk relating what had happened to me and that I felt this was very unfair. I was told that I should not have had to pay for a new ticket, as there is an exception rule to help passengers that find themselves in my situation.

The supervisor explained that he could not refund me anything at that point but that I could write US Airways and explain my circumstances and ask that they allow me a refund due to the nature of my delay.

She did, but US Airways sent her a form rejection. I suggested she appeal her case, but the airline sent her another form response.

Clearly, the “flat-tire” rule — if it still exists — is being inconsistently applied by US Airways. The call center has told de Pascht “tough luck” and demanded she pay more for her rescheduled flight, but a supervisor in Albany says she shouldn’t have had to pay more.

Who is right? Well, here’s where I’m on the fence. Both are correct.

De Pascht missed her flight — she was technically a “no show” — so her seat flew empty. If US Airways just puts her on the next flight for free, it forfeits the revenue it might have received from another paying passenger. So it’s well within its rights to charge her whatever it wants for the new seat.

But as a practical matter, the supervisor in Albany is correct. De Pascht couldn’t make her flight because of circumstances beyond her control. Airlines constantly invoke “circumstances beyond their control,” such as weather or air traffic, to delay or cancel their flights. When that happens, their passengers aren’t compensated in any way — they must patiently wait for their next plane.

I think the supervisor may be more right than corporate US Airways, because he sees that the airline is selling more than seats. It’s selling tickets to passengers. How can you not have a little compassion when you’re in the business of transporting people?

Still, rules are rules. Even if de Pascht, a supervisor and I disagree with them.

Should I mediate? A poll of more than 700 readers says I should. 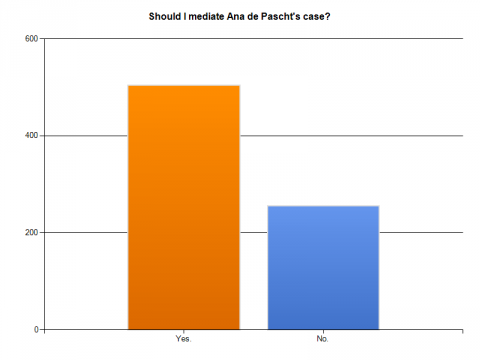 Update (2/4): Pascht contacted the Transportation Department, which got in touch with US Airways. Here’s the airline’s response.

The Department of Transportation, Aviation Consumer Protection Division has forwarded a copy of your recent correspondence concerning the recent travel difficulties you experienced. I appreciate this opportunity to further respond to your concerns.

We sincerely regret the circumstances that necessitated a change in your travel plans. Normally when a passenger contacts our Reservations Department to change their non-refundable ticket, all terms and conditions apply including the customary change fee and any difference in fare. However, due to the circumstances described and the information you received at the Albany Airport, as a courtesy I have submitted a request for a refund the $150.00 change fee to our Refunds Department. Please allow three weeks for the processing of the refund. When a credit card is used for payment, it may take 1 to 2 billing cycles for the refund to be reflected on the statement.

I love a happy ending!