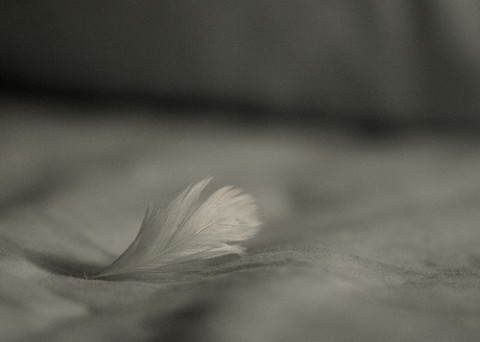 Patricia Lenhart’s husband woke up one recent morning covered in bug bites. Bedbug bites. He and his wife were guests at the Best Western Beach Dunes Inn in Marina, Calif., and when they mentioned the probable infestation, a woman at the front desk said the hotel “hadn’t had a problem” with bedbugs before.

Then they checked out TripAdvisor, and discovered that wasn’t true.

“I found two recent reviews complaining of bedbugs,” she says. “Both people state that they notified the front desk. One of them was over a month ago! Unfortunately, they were both posted after I made my reservation. I don’t have any faith that the hotel will follow through on their promise to fix this.”

I contacted Best Western on her behalf, and as you’ll see in a minute, it reacted quickly. Question is, did it do enough?

She and her husband were spending the weekend at the Best Western. On Sunday morning, her husband awoke with what appeared to be insect bites.

We were hoping that they were mosquito bites, but an inspection of the bedding revealed drops of blood on his pillow and sheet and a very small bug that left a smear of blood when it was squashed.

Research on the Internet confirmed that the bite pattern is exactly like the examples of bedbug’s bites.

We know that bedbugs have become epidemic in this country and our concern was for any future occupants of that room. We talked to the woman at the front counter who told us that they hadn’t had a problem with bedbugs before.

We discussed the work she would have to deal with the problem and what we needed to do to prevent spreading the problem to our home. She gave us some large plastic bags to put our luggage in and we left feeling she would take care of the problem.

I used the contact form on Best Western’s website to notify them of the problem and ask for their assurance that his is being dealt with, but only received a form letter in reply. I search the Internet for a proper e-mail address to write to, but the only one I found returned the a-mail.

How do I make sure this is being dealt with?

Good question. I contacted Best Western and here’s what happened next:

An hour after your e-mail, I got a response from Best Western. I was offered an apology and a free night at the hotel, which we plan to turn down. Our concern was that the problem be addressed.

It’s clear that she was responding to the e-mail from you rather than the e-mail I submitted on their website. What a shame, that it took your intervention to get a response. I would think that the word bedbug would generate an immediate response rather than a form letter given the epidemic-like problem that hotels are having with bedbugs.

Is Best Western’s response adequate, given what happened to the Lenharts? Or should they have done more? 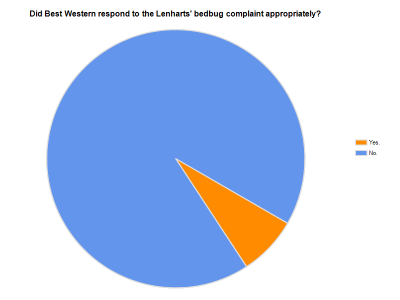