“Safety first” may be the American travel industry’s unofficial slogan, but for some travelers, it’s more like “Me first!”
END_OF_DOCUMENT_TOKEN_TO_BE_REPLACED It started with a seemingly harmless question left on my personal Facebook page.
END_OF_DOCUMENT_TOKEN_TO_BE_REPLACED Mentioning the words “airline” and “luggage” in the same sentence is one of the fastest ways to start an argument.

Maybe it’s enough to dredge up suppressed memories of your last flight, when an inconsiderate passenger stole the bin space above your seat with an overstuffed Rollaboard. Maybe you’re thinking of United Airlines, which recently announced it would crack down on oversize carry-on items.

Then again, perhaps Frontier Airlines, which said last week that it would start charging $25 for carry-on bags on certain fares, comes to mind.

Yes, the overhead bins are way too small. And yes, airlines want to check your bags because it speeds up boarding, and they earn billions in luggage fees.

But there’s a lot more to the luggage conflict.

We seem to have lost our way when it comes to airline baggage. True, U.S. airline passengers often have zero manners in the luggage department, particularly when it comes to their carry-on items. But air travelers have good reason for their lack of civility, and fixing the problem will require a concerted effort by travelers, airlines and agents.

Let me be the first to admit that my luggage etiquette is sometimes lacking. On a Southwest Airlines flight from Denver to Salt Lake City recently, I thoughtlessly shoved my son’s backpack over someone else’s seat as I boarded (I’m sorry). Going through customs at JFK a few weeks ago, my Delsey bag inadvertently rolled over another passenger’s feet (I’m really sorry about that one).

The former faux pas is one of Patrick Smith’s pet peeves, especially when the bag is stored in the first available luggage bin.

“That causes the forward bins to quickly fill, meaning that passengers seated toward the front are forced to travel backward down the aisle to stow their belongings,” says Smith, author of Cockpit Confidential: Everything You Need to Know About Air Travel. Result: The already tedious boarding and deplaning process becomes even more time-consuming.

Susan Foster, author of the book Smart Packing For Today’s Traveler, says rolling over someone else’s feet is a problem — for kids. “Very small children with cute little rolling suitcases are a danger to all who cross their paths,” she says. “They are simply too young to know how to control the bag and to understand they should watch where it is going.”

What makes us lose our minds over luggage? Airline passengers used to schlep everything but the kitchen sink on board, fearing their checked bags would get lost. But less luggage is being lost by domestic airlines. Last year, the Transportation Department reported that 3.22 bags were lost or misplaced per 1,000 passenger enplanements, about half as many as in 2007. Then again, passengers have been more reluctant to check their luggage since most airlines stopped including the first checked suitcase in their ticket prices a few years ago.

“This shift has led to limited space for carry-ons and a slowed-down boarding process as passengers attempt to avoid bag fees,” concluded a recent report on airline complaints by the U.S. PIRG Education Fund.

What’s the fix? As I thought about the circumstances leading up to my baggage-stowing and rollover incident, the answer became more complicated. See, I stole the overhead bin from another passenger because I felt rushed to board the jet so it could depart on time. A crewmember announced that the plane couldn’t leave until everyone was seated, prompting me to find a seat fast. I rolled over the passenger’s feet in New York because a throng of people behind me was literally pushing me through the terminal, not because I can’t control my rolling bag.

If I need a refresher on luggage etiquette — and I do — perhaps we all could benefit from one. Yet, airlines and travel agencies can help, too. How about informing customers of proper etiquette before they board? Airlines might, if checked bags weren’t such a moneymaker.

Losing less checked baggage is a good start, but etiquette expert Jodi Smith says there’s only one way to defuse the luggage conflict: “Have airlines include a checked bag in the price of their tickets.” Ah, but wouldn’t airlines lose money? Tell that to Southwest and JetBlue, both of which manage to include a checked bag and earn a profit.

Installing more luggage templates and threatening to send passengers who overpack back to the ticket counter to shell out $25 to check their bag seems to be the preferred route for airlines. But that probably will make an already bad situation worse.

Isn’t it time for a little luggage detente?

How to lighten the load

Pack smaller. After Dana Berry was told her regulation-size bag was “too big,” she decided to downsize her carry-on. “There’s a payoff for economizing,” says Berry, who works for a Little Rock communications firm.

Board early. “Those poor unfortunates relegated to boarding group 4 or 5 often have to gate-check all their bags,” says professional speaker and frequent flier Barry Maher. “That causes all additional conflicts while they take out their frustration on the flight attendants and, in some cases, even delay departure.” To avoid that, board early if you can.

Ship it. Shipping services such as FedEx and UPS, or baggage services such as LugLess.com, can help you bypass airline luggage altogether. LugLess has even publishes a useful cost calculator to help you determine whether shipping your bag makes sense.

When did travelers lose their manners?

When did they stop saying “please” and “thank you,” start filling the entire overhead bin with their carry-on luggage and stop bathing?

The trendsetting airline industry, which has become the poster child for impoliteness in travel, wants you to believe it doesn’t matter. It claims fares are low — an average $283 ticket price in 2012, which is roughly the same as 2001 after adjusting for inflation. It points to its almost-flawless safety record. Who cares that no one treats each other well?

But as 2013 draws to a close, you know something is wrong — very wrong — with the way we travel. Expedia’s Airplane Etiquette Study, released this month, exposes the many ways we’re annoyed. Topping the list: negligent parents, seat kickers and smelly seatmates.
END_OF_DOCUMENT_TOKEN_TO_BE_REPLACED 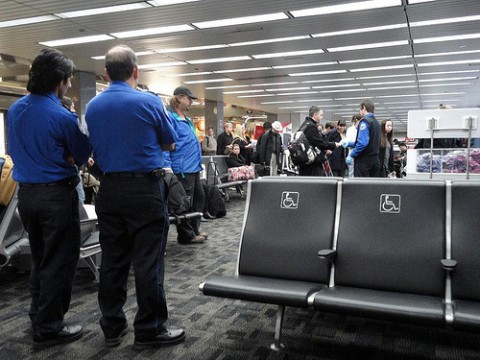 If you’ve ever been browbeaten, barked at or belittled by a TSA agent — and let’s be honest, who among us hasn’t? — then you’ve got a friend in Sen. Harry Reid (D.-Nev.).
END_OF_DOCUMENT_TOKEN_TO_BE_REPLACED