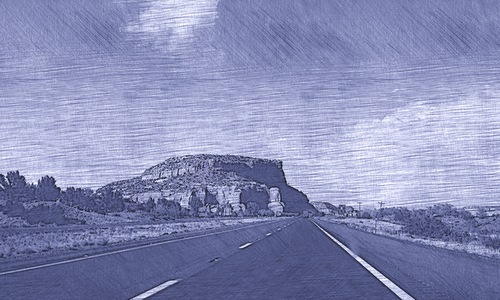 It happened just after sunrise a few weeks ago, as we navigated a narrow two-lane highway between Santa Fe and Santa Rosa, N.M., in our family sedan.

I was quietly admiring eastern New Mexico’s sandstone rock formations, their improbably flat tops towering above us, when I felt a sudden jolt, followed by a loud vibration from the right front wheel. It sounded as though an angry rattlesnake had been sucked into our engine.

I pulled our seven-year-old Honda Accord to the side of the road. Our three kids began to stir in the back seat. I glanced at my phone: no signal. I hadn’t seen another car for a while, maybe half an hour. We were miles from nowhere.

I imagined every worst-case scenario, and believe me, I have a very good imagination. I could already see the headline: “Travel columnist and family found dehydrated but alive in New Mexico desert after two-week search.” What I didn’t think about, but probably should have, is that getting stuck in the New Mexican desert is as much a part of the travel experience as any flight delay, cruise mishap or hotel horror story — and it’s a part that journalists like me ignore far too frequently.

I mean, odds are that you’re not going to fly to your summer vacation destination. You’ll probably drive.

How many of us get there by car vs. plane? It’s difficult to draw a precise comparison because of the way the federal government measures travel. Americans drove more than 1.1 trillion miles on the nation’s roads last summer, according to the Federal Highway Administration. During the same period, they flew 157 billion miles, according to the Bureau of Transportation Statistics. In other words, for every mile we flew, we drove about seven.

Independent studies suggest that the gap may be even greater among leisure travelers. For example, during the Memorial Day holiday, 30.7 million Americans drove to their destinations, while only 2.5 million flew, according to a DK Shifflet & Associates survey conducted for AAA. For the Christmas and New Year’s holiday, 83.5 million drove; just 5.4 million got to their destinations by plane.

Ignoring road travel is a time-honored tradition among my esteemed media colleagues. We’re fascinated by things with wings; it seems to be a prerequisite to becoming a travel writer. We also assume that everyone travels just as we do, zipping between airports, dealing with the TSA and checking into hotels.

Mark Sedenquist, who runs a Web site called RoadTrip America, says that I shouldn’t feel too bad about that. Road-trippers are not only difficult to define as a demographic, but they’re also a challenge to market to. “The only common element regarding marketing-and-merchandising targeting is that most road-trippers will purchase fuel on a road trip,” he says. “Every other element — food, route, destination, gear, lodging, camping, activities, communities and communications — can be about as diverse as possible. So the travel industry tends to avoid any marketing to road-trippers. They have no idea how to do it.”

At a moment like this, I would reflexively defer to my friends at AAA. They’re all too familiar with the downgraded status of the American road trip. But there’s also this: the basics of road travel are pretty constant. And they’re mostly common sense. I asked Heather Hunter, my AAA contact, to share her organization’s road-trip advice for the summer.

“Carry an emergency kit with a flashlight, extra batteries, warning devices such as flares or reflective triangles, jumper cables, a first-aid kit and extra water,” she told me. “Don’t let the gas level get below one-quarter of a tank.”

Her list also included planning the trip carefully, securing kids in the back with approved seats and using one of AAA’s smartphone apps to help plan the journey.

That’s great advice, but it’s not exactly new. The rules of the road aren’t as volatile as the rules of air travel and, to a lesser extent, of cruises or hotel stays. Also, motorists don’t have to beware of a scam lurking around every corner; there are perils, that’s true, but it’s nothing like flying.

Consider one of my problems in the New Mexico scenario — being out in the desert with no wireless connection. “I thought we’d have that fixed by now,” says Chicke Fitzgerald, a road trip evangelist who is the chief executive of the Tampa, Fla.-based travel technology company Solutionz Holdings. She’s been watching technology evolve, often at a snail’s pace, and says that there’s room for improvement. And growth. She says that businesses are just beginning to wake up to the massive size of the driving market, and she envisions a time in the not-too-distant future when the needs of mobile travelers are met through products and services that weren’t originally designed for airline passengers, as virtually all of today’s online travel sites are.

I wish I’d talked with Fitzgerald before my road trip. But there I was on my hands and knees on the already hot pavement, looking for a rattlesnake under my car. I saw nothing. I started the Honda up again. The rattle was gone.

Cautiously, I pressed down on the gas pedal. I didn’t hear anything unusual. Still, that didn’t keep me from getting the car checked by a professional at the next service station.

Turned out that a small, nonessential part had slipped off the wheelbase. It was safely removed at my dealership a short while later.