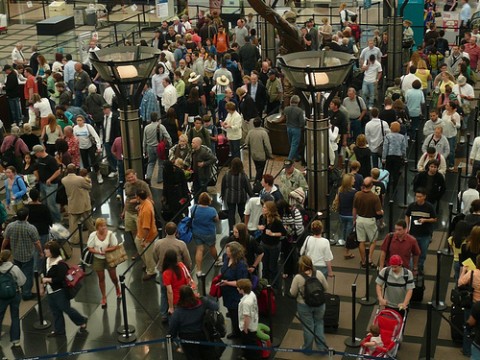 The TSA, an agency with a distinguished track record of roughing up air travelers, is complaining that it’s being bullied.

I’m not kidding. The TSA’s employee union, the American Federation of Government Employees (AFGE), is accusing Rep. Marsha Blackburn (R.-Tenn.) of “bullying the TSA workforce” after she introduced a bill last week that would require its agents stop dressing like law enforcement officers.

Frontline TSA agents are not required to receive any law enforcement training and aren’t eligible for federal law enforcement benefits. Blackburn says that hasn’t stopped some TSA employees from abusing their limited authority against an unsuspecting public.

“Earlier this year in New Jersey, [an agent] was arrested for impersonating an officer and days before Thanksgiving a Virginia woman was brutally raped after [an agent] approached her in uniform, waving his badge,” Blackburn said.

It is outrageous that in a post 9/11 world that the American people should have to live in fear of those whose job it is to keep us safe.

Congress has sat idly by as the TSA strip searches 85-year-old grandmothers in New York, pats down 3-year-olds in Chattanooga, and checks colostomy bags for explosives in Orlando.

Enough is enough! The least we can do is end this impersonation which is an insult to real cops.

(There’s more on the TSA’s record of abusing its presumed “law enforcement” authority on the TSA News Blog.)

The TSA is telling on Blackburn, who doesn’t exactly fit the description of a bully. She is, as far as I can tell, a right-leaning congresswoman from the Nashville suburbs with a long track record of holding the government accountable. Accusing this grandmother of persecuting TSA agents is laughably absurd.

And yet that’s exactly what the TSA’s union is doing. In a huffy statement issued late Friday, the Federation of Government Employees denounced her bill as “petty” and “ridiculous.”

This bill has nothing of significance, certainly does nothing to add to our national security, and – at a point where Congress should be focused on the budget, economy, jobs, etc. – is a complete waste of time.

Reps. Blackburn, Mica and their other cohorts in the House need to stop bullying the TSA workforce, and maybe just worry about doing their own jobs.

Instead of actually helping to fight terrorism, they are inspiring the type of unnecessary and disrespectful behavior by a few members of the public with an agenda that in fact diverts attention from securing American skies.

Gage’s statements are understandable. He’s coming to the defense of 44,000 members, who could have their uniforms downgraded if this law passes.

But would removing the badges and police-like uniforms actually “inspire” disrespectful behavior?

It’s hard to imagine that things could get any worse for this unpopular agency. But look around the airport for other examples of employees who dress down if you want an answer.

The most casually-attired crewmembers are Southwest Airlines’. Their flight attendants don’t have to wear the uncomfortable polyester uniforms that their colleagues at the legacy airlines do. Have air travelers disrespected them because they don’t have a uniform that makes them look like an extra on the TV show Pan Am?

If anything, an argument can be made that passengers feel more comfortable around Southwest’s attendants. I certainly do. The crewmembers look like they’re having a good time at work, and they connect with their customers in a way other flight attendants can’t.

I think dressing down the TSA might actually be the key to making agents seem more accessible and putting a friendlier face on the agency. It would certainly prevent TSA agents from misleading the public they have been assigned to protect.

Maybe it would also allow passengers to question TSA agents when they cross an ethical line, in the rare but highly-publicized cases when they use their badges and uniforms to force us into obedience — and then take advantage of it.