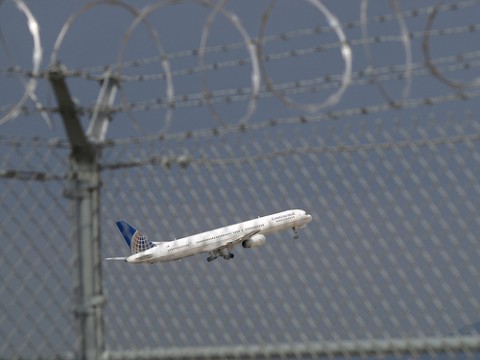 “As a proud American, I served my country with loyalty and dedication in the aftermath of 9/11 by joining the TSA and the fight on terror,” the letter begins. “After publishing a book about the TSA and Airport Security, with full knowledge of the FSD and his assistants, I’ve now been targeted for removal along with the evidence, while the cover-up for the truth is in effect.”

The missive, sent from Transportation Security Officer William Touzani directly to the president, landed in my “in” box yesterday afternoon. I’m not the first person he approached with this story. He published the entire letter on CNN’s iReport a few weeks ago.

I guess no one at CNN took him seriously, and I’m not surprised. Have a look at his book, and you’ll see that it’s in need of a good editor. (And hey, I’m the first to admit, everyone needs a good editor — especially yours truly. It’s the bad editors you’ve gotta worry about.)

Here’s a link to the book.

I followed up with Touzani because frankly, I didn’t believe him. He sent me two letters from his supervisor that left me more convinced he did work for the TSA and that he was being fired for speaking out. In a letter he shared with me from last March, a supervisor in Houston wrote that he had revealed sensitive security information that could have “severely compromised” the agency’s position.

But what, exactly, was he saying that made the agency so upset?

The point of Touzani’s rambling ebook is that the government profiled Muslim passengers for years, which he found offensive. But I doubt that’s what the TSA found offensive about his book.

For example, in chapter 17 of his manifesto, Touzani describes in great detail how sensitive security information is handled by the agency. These secrets can’t be given to officers on paper, should it fall into the hands of terrorists or “the media.” (The implication being that they’re one and the same.)

Problem is, the material is sometimes difficult to remember. He cites the example of TSA’s new explosive detection devices which are 100 times more sensitive than their predecessor. If he can’t take notes, how can he remember what he’s being taught?

Among other other revelations:

• Many of the security “breaches” at his airport involved TSA agents who were distracted and allowed passengers to walk through the wrong door.

• The leak of the Standard Operating Procedure manual a few years ago was no big deal. Most of that information could be gleaned from sitting at a Starbucks across from the screening area and taking notes. (Are you listening, terrorists?)

• Want to get a secondary screening? Buy a one-way ticket with cash, which sends up “two red flags.” That’s been widely reported by the media, but Touzani confirms it.

The most interesting part of Touzani’s book is called “checkpoint classics,” and it describes some of the more bizarre security issues and how they’re handled, from men with large bulges in their crotches to women who bare their breast at the checkpoint.

I think TSA has every reason to be concerned that one of its own agents has written a tell-all book that may have unwittingly exposed sensitive security information. But if that’s the case, then why not ask him to remove the manuscript? In none of the disciplinary letters he sent to me is there any mention of deleting this book.

That makes me think that Touzani is being singled out for something else — that while his revelations may be embarrassing to the agency, it is simply uncomfortable having an outspoken, pro-Muslim agent in their ranks.

But what do I know?

If you want to see things from a TSA agent’s perspective, Touzani’s book (you can view it for free online) is an interesting read. It also makes me wonder if it will renew the calls we’ve heard in the recent past to reform the TSA — if not eliminate it.