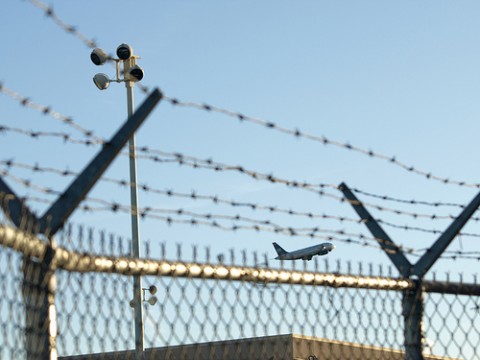 Editor’s note: This is the second installment of “TSA Watch,” a new weekly column about the federal agency charged with protecting America’s transportation systems. Why? Because no one else is.

Here’s an event that many believed would directly affect the way people travel. They felt a prudent move would be to tighten security at airports, train stations and other public areas, for fear of a retaliatory attack by Al Qaeda.

Instead, the agency charged with protecting the nation’s transportation systems said nothing for several days, allowing us to speculate about our upcoming trips. Would we all be patted down at the airport? Stopped at a checkpoint on the bridge? Strip-searched before we boarded the subway?

Then TSA released a statement more than four days after the event that essentially said nothing:

I can reassure you that we’re constantly looking at current intelligence to evaluate and adapt our procedures to keep the flying public safe.

Passengers may continue to notice a variety of security measures at U.S. airports to include the use of physical bag checks, random gate screening, explosives detection technology, canine teams and behavior detection officers.

We ask that you remain vigilant when you travel and report any suspicious activity to the authorities.

It gets worse. The next day, the TSA issued another a press release. Good idea, right? Maybe it could further clarify the post-Osama security precautions. But no. Instead, it published a silly statement extolling its shoe-removal requirement.

So the bad guys are threatening holy jihad against America, and TSA is high-fiving itself over a knife found in a passenger’s shoes in San Juan? I don’t have to tell you there’s something wrong, very wrong, with this picture.

In fairness to TSA, the Department of Homeland Security did issue a statement on Monday about its security posture after Osama’s death. But it was even more vague than TSA’s, saying only that the United States remained “at a heightened state of vigilance” but that it wouldn’t take any additional steps.

Let’s pull back a little and get some perspective on this. Just a few days before TSA’s non-response to Osama’s death, it did another questionable thing. It had children manning its screening areas.

I’m not making this up. Here’s a firsthand report. A passenger reported having his ID checked by an eight-year-old boy (part of “Take Our Daughters and Sons to Work Day”) in State College, Pa. The post caused a little dustup in the frequent flier community, which questioned why children would be allowed to perform vital security functions.

In an unusual move, the TSA’s notorious “Blogger Bob” responded in the comments of his last post to critics. “While what you read about or witnessed may seem odd, the children were not making any security decisions,” he wrote.

As if that didn’t confuse passengers enough — and I’ve gotta tell you, if I’d had a six-year-old-girl ask me if I wanted to be scanned or patted down, I might have been thrown for a loop — there was this. Earlier in the week, the TSA released a few details of its plan to selectively screen passengers to a reporter who had been more cooperative with the agency than yours truly. (No, they don’t let me talk with Administrator John Pistole, even when I’m on assignment for one of my big-name, A-list media outlets. They know better.)

The plan was as troubling as it was vague. TSA apparently wants to exempt certain elite-level frequent fliers from screening, but not always. They don’t want to be too predictable, says Pistole.

Personally, I don’t believe any of it. If TSA is making a statement to the press the very next day on the virtues of having us take our shoes off at the airport, then it’s either lying to us or to the reporter. Care to guess who’s being duped?

So why would the TSA want to spread fear and confusion after Osama’s demise? Easy. The more fearful we are, the more compliant we become. We won’t question the scanners, the pat-downs, the shoe removal, the random gate checks. We won’t mind being stopped on the Metro and interrogated or pulled over at a checkpoint on the road and searched.

Why? Because we are afraid the terrorists will get us, and we incorrectly believe the only thing standing between us and them are an army of underpaid, poorly-trained screeners with no law enforcement ability whatsoever.

The Department of Homeland Security seems to be positioning Bin Laden’s death as an excuse to bulk up its security apparatus. But while ramping up the fear and confusion certainly serves the system, does it also serve the taxpayers that fund it?

If anything, maybe this is a good time to consider dismantling the reactionary, incompetent and unconstitutional security machine that was created after 9/11. 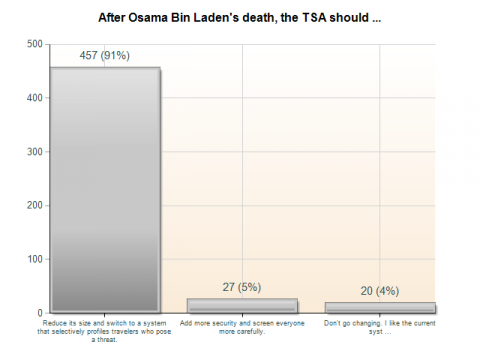