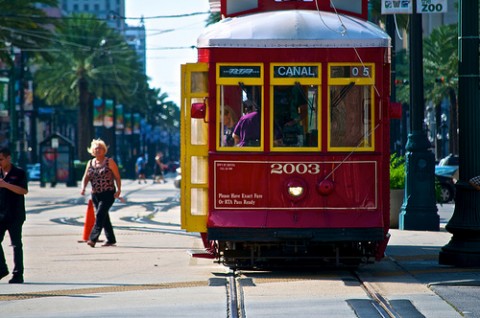 Last spring, he was schedule to fly from Los Angeles to New Orleans for Jazz Fest and to volunteer at Habitat for Humanity. He’d booked a package tour, which included airline tickets, hotel and car rental, through Hotwire.

“When I showed up at the airport for my US Airways flight, I was told that my reservation was for a United Airlines flight,” he says.

Ah, another case of codeshare confusion? Yes, but that’s not all.

Szabo picks up the story,

I trekked all the way to the United terminal — which, by the way, is the longest possible distance from US Airways at LAX.

When I got to the United kiosk, I was informed that my reservation number was invalid, and they refused to help me.

Finally, I convinced one of United’s people to call Hotwire to clear up the confusion. She dialed and handed the phone to me.

Hotwire then put me on hold for a whole hour. When they finally returned, they gave me a proper reservation number, which United was able to verify. However, by that time my flight had already departed, thanks to the hour on the phone.

You can imagine what happened next.

Since it was Jazz Fest, there were no other flights to New Orleans, and he had to cancel his volunteer vacation, he says. Hotwire refunded his rental car, but wouldn’t reverse the hotel charge and deferred to US Airways for the ticket.

I then tried to resolve the issue with US Airways for the airfare, but they would only repeat their policy that “tickets are non-refundable and may be used within one year of purchase with a $150 re-booking fee”.

Are you kidding me? They effectively canceled my reservation without cause or notice and now want to charge me an additional $150 per ticket? What kind of re-negotiation tactic is that?

I thought Szabo had a strong case for a full refund, so I contacted Hotwire on his behalf. Here’s its answer:

After looking into this further, it seems like this unfortunate conclusion was a result of code-share issues as well as a few additional considerations. Here’s more background on what we found through our research.

Mr. Szabo booked a code-share flight, meaning he booked through US Airways, but the flight was operated by United. Code-share bookings are relatively common in the airline industry, and state clearly that a flight is “operated by X airline” both before and after purchase, regardless of who the flight was booked through. However, it’s always very important to still review itineraries carefully.

In looking at the notes in the system, it appears that the reason Mr. Szabo was unable to initially check in with his United flight was due to a late arrival. Whether that was caused by the delay from going to the US Airways terminal first or just because of a late arrival in general isn’t clear, but the end result is unfortunately the same.

In terms of the confusion around reservation numbers, theoretically that should not have posed any issues for the United agents. As mentioned, code-shares are very common and whether they we presented with the USAirways number or the subsequent United number, it shouldn’t have made a difference, especially because reservation numbers aren’t generally required for check in. A kiosk or agent should only need the customer’s identification and destination in order to find his flights. It is possible that the United desk agent provided Mr. Szabo with incorrect or confusing information on why he wasn’t allowed to get a boarding pass initially, but unfortunately we can’t speak to that interaction.

After we were able to help establish that everyone had the correct information, United offered to re-book Mr. Szabo on the next available flight to New Orleans, which was the following day (the original trip was booked as a 6 day vacation). Mr. Szabo declined this option and decided instead to not take the trip. Despite the fact that this trip was a pre-paid package purchase and therefore non-refundable, we were able to help negotiate a refund of the car rental with Thrifty. Unfortunately, because of the circumstances that lead to Mr. Szabo’s cancellation, neither United nor the hotel were willing to offer a refund.

As a side-note, United did change the departure time for Mr. Szabo’s flight several months before his trip by moving it roughly 45 minutes earlier than originally booked. I’m not sure if he mentioned this part to you, but it was included in our case notes. An automated email notification was apparently not received by the customer, but we were able to deliver this information verbally when we spoke to Mr. Szabo on the phone for a related matter (he requested a separate change for his travel plans). This was in late March, and was over a month before his May departure.

OK, so according to Hotwire, Szabo knew of the flight change. Its records show he could have flown to New Orleans the next day, missing just one day of his vacation. And the tickets he had shouldn’t have caused an hour’s worth of confusion, either.

I’m reluctantly sliding this one into my “case dismissed” file. I’m not sure what to make of Hotwire’s explanation, but I do know that short of going to small claims court, he’s not going to get a full refund from Hotwire.