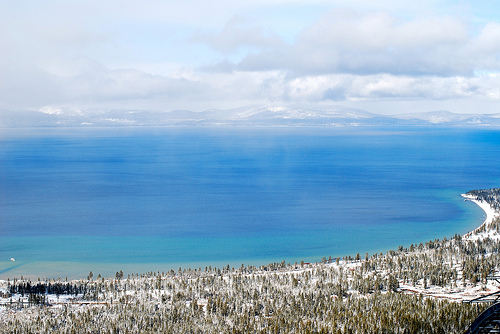 There’s no more breathtaking view from a ski slope than the one you get on a crystal-clear day from Heavenly Ski Resort.

I’m here to speak on a travel industry panel at Snowcial, a social media and skiing conference. No, I’m not making this up. This is Snowcial’s third year.

Anyway, about that view. I’ve skied in some beautiful places before — the Alps, the Rockies, and even
Le Massif in Québec, which overlooks the St. Lawrence River. But nothing in the world can compare to the mesmerizing view of Lake Tahoe we had yesterday.

If only we could have such a clear view of the future, when it comes to social media.

After half a day on the slopes — and I’ve gotta tell you, no one wanted to stop skiing — we convened in a meeting room at Harveys Lake Tahoe to talk business.

Most of the attendees were marketing managers and developers, so no one needed to have social media explained to them. If anything, these were hard-core social media devotees. An enormous screen displayed the Twitter feed with the Snowcial hashtag.

MC Hammer, yes that MC Hammer, kicked the conference off by talking about how social media influences his creative process. Here’s a guy with almost two million Twitter followers, so he knows a thing or two about building a community through social media. I liked the MC’s presentation, especially the part where he referred to the CES attendees in Las Vegas as “misguided souls.” ;-)

Rob Katz of Vail Resorts, which owns Heavenly, talked about EpicMix. For more on EpicMix, see our interview here. Epic could represent the next evolutionary step in social media and snowsports, and while the early results are promising, it’s too soon to tell where EpicMix’s place will be in the galaxy of social media. Only that it will have a place.

David Norton, the senior vice president and chief marketing officer of Harrah’s Entertainment, talked about the company’s loyalty programs, technology, and how Harrah’s saved money by cutting its advertising budget and relying on social media.

One of the most fascinating presentations was from Duncan Berry, a behavioral expert who revealed how most of the decisions we make in life have an emotional basis, and practically nothing to do with reason. Some of the research his company has conducted challenges our most basic assumptions about marketing.

Oh yeah, and there was our panel. Richard Beattie, John DiScalia and yours truly, participated in a self-moderated panel about social media and travel. Richard and John were great, making important points about using social media to reach travelers.

When I suggested that there were some travel companies that shouldn’t engage in social media a stunned silence fell across the room.

Later, in the Q&A, one audience member later asked me why I didn’t like social media. But I do like social media, I assured her. I just think some travel companies have no business twittering and Facebooking, when they should be focusing on taking care of their customers in real time.

I think I may have also shocked some participants by suggesting the real social media revolution hasn’t taken place yet — that all of the changes up until this point have been incremental and evolutionary.

I could be wrong about that, of course.

Anyway, the travel panelists ducked out of the conference after that, so unfortunately, I didn’t catch the other terrific speakers. Maybe I’ll catch up with them today on the slopes.