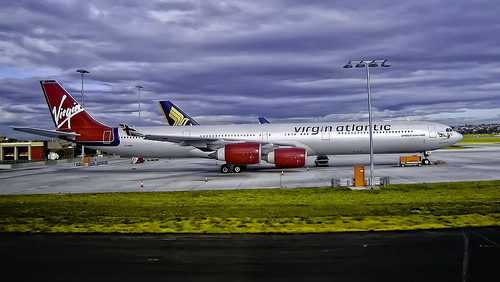 You knew this would happen.

Virgin Atlantic Airways just announced it would deploy larger aircraft on key routes over the 12 days of the planned British Airways cabin crew strike “in order to carry stranded passengers.”

Virgin Atlantic has identified a number of flights on routes such as New York (Newark), Boston, Washington and Delhi where it is feasible to operate the flights with larger aircraft. These selected flights will now be operated by an Airbus A340-600 rather than an A340-300, thereby providing 68 extra seats per flight. The extra seats will go on sale over the next 24 hours.

British Airways and Virgin Atlantic are bitter rivals, of course. Which makes the following quote from Virgin’s Richard Branson so — well, let me just play the clip for you:

It is a nightmare for passengers, and you have to feel for them at Christmas time. Any strike would obviously be extremely damaging to everybody – the company, employees and most importantly the traveling public.

But a good PR opportunity for Virgin Atlantic. Why else would you issue a news release on this? (Actually, let me rephrase: What took you so long?)

Meanwhile, British Airways has bigger fish to fry. It’s going after its own employees.

This morning, BA issued the following statement directed at Unite, the employee union staging the strike.

British Airways is extremely disappointed that Unite is planning massive disruption for hundreds of thousands of our customers over the Christmas/New Year holiday period.

A 12-day strike would be completely unjustified and a huge over-reaction to the modest changes we have announced for cabin crew which are intended to help us recover from record financial losses.

Unite’s cynical decision betrays a total lack of concern for our customers, our business and other employees within British Airways.

I’ve contacted the major online travel agencies to see what they’re doing for passengers who are likely to be inconvenienced by this strike. An Orbitz representative says the company is working with BA to come up with a policy, but was not ready to release anything. Expedia hasn’t responded to my queries. Here’s what Travelocity had to say:

I don’t have any specifics to share right now other than that we’re working with BA on behalf of our mutual customers whose travel plans could be impacted. I’m sorry that I don’t have any more details for you, but, rest assured, this is a high priority item for us.

I’ve had numerous off-the-record conversations with airlines during the last 24 hours, and am actually hopeful that everyone who wants to be moved to a new BA-free itinerary is being given that opportunity. These things take a while, and at this time of year, patience tends to be in short supply among passengers.

Please continue sending me your stories and re-booking challenges, and I’ll do my best to help. With any luck, this strike will be averted quickly.