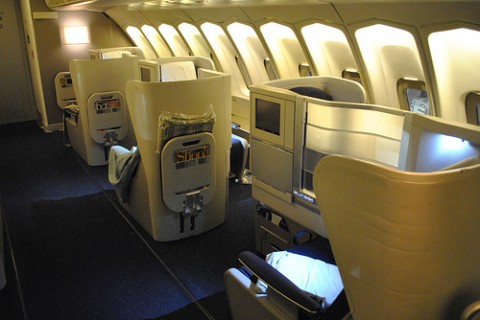 While everyone else is touting the benefits of new “lie-flat” airline seats in business- and first class, I know I can count on you, dear readers, to find a “down” side.

And here it is.

As you probably know, a lot of airlines have been adding new seats to their premium cabins that recline into small beds. United Airlines last month announced it would spend $550 million to install these recliners and make other improvements to its fleet.

American Airlines, in an effort to outdo its competitor, even said it would add “turndown” service to its first class cabin.

So what’s wrong with that?

Well, nothing. I’d donate a kidney have one of those seats on my next trans-Pacific flight instead of being squeezed into sardine class.

Except maybe this: When you sleep lying flat, gravity weighs down on the soft tissues of your pharynx. Your palate, tonsils, and tongue are pulled backwards, which narrows the airway just enough to cause — yep, that’s right — snoring!

“With some airlines moving towards flat beds in first and business class, what does this mean for people who actually want to sleep and not be bothered by someone who’s snoring?” asks reader Merrill Albert. “I have been kept awake numerous times by someone snoring very loudly.”

None of the major US airlines address snoring anywhere in their published policies, and I wouldn’t expect them to. That’s because it’s unusual for a passenger to sleep for any extended period of time, let alone get into a position where snoring is possible. Rather, snoring incidents are handled on a case by case basis by the flight crew.

“Yes,” admits Pasquale Goglia, “it was me. And I put my CPAP machine on. Don’t leave home without it.”

“I always bring ear plugs,” says reader Joe Reynolds. “The wax ones that adapt to the ear canal and give a good sound seal.”

Earplugs also help block some of the engine noise, allowing you to sleep. I always carry earplugs or noise-canceling headphones, and an eye mask on longer flights. It’s the only way to rest, and nothing stops a chatty seatmate who can’t buy a clue like earplugs and blinders.

Kevin Morgan, an admitted snorer, tries to stay awake on flights to avoid a confrontation with another passenger.

“I try as much as possible to stay awake on flights, but the tedium can get to me, and often I’m traveling with little sleep before I have to hit the airport,” he says. “Caffeine only goes so far, especially when the service is often slow and skimpy on flights.”

So he tries to warn anyone sitting next to him that he snores. He even brings earplugs to offer his seatmates.

I think Albert has made an astute observation. As the number of lie-flat seats expands, so, too, will the snoring incidents. What if the guy next to you is cutting a few very loud “Zs”?

“If I did have a snorer, I would jab them awake — repeatedly if necessary — and notify a flight attendant,” says Janine Johnson. “It’s a simple matter of keeping this sufferer awake till they can sleep in private. I sympathize with the person but again, they need to be considerate of others and take meds, get surgery, or sleep before they fly. If not, they are guilty of having a ‘me’ attitude, which we all must obliterate.”

I agree with Johnson in one respect: If you know you have a snoring problem and you curl up in lie-flat seat on a 12-hour flight without a CPAP machine, you’re being selfish to the rest of your seatmates (or in this case, bedmates). You have no right to keep everyone awake.

In another sense, this is a good problem to have. It means that airlines are offering more passengers the opportunity to have a good night’s sleep, and how can you fault them for that?

An entire plane of passengers sleeping in the horizontal position would mean airlines have trashed their steerage class cabins, which probably violated several articles of the Geneva Convention, anyway.

Bring on the snorers, I say.