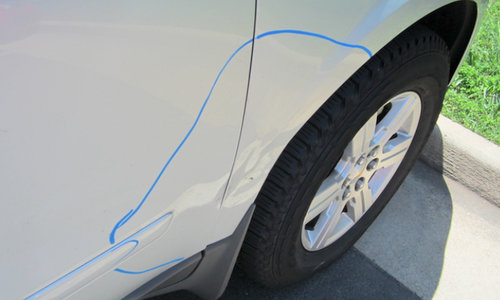 When Stacy Mills rented a car from Alamo recently, she says the vehicle had “several minor scratches” on the front right door of the vehicle. Although she tried to report the damage, an employee waved her off, telling her not to worry.

You probably think you know how this story ends. Mills got a bill anyway, I contacted Alamo, and it dropped the charges.

But that’s not how this one ends. This case makes me take a step back and evaluate my entire consumer advocacy practice. You’ll see why in a minute.

When I returned the vehicle, the gentleman who checked the vehicle in stated that I needed to submit a damage report due to the pre-existing scratches and that alamo would contact me within seven days.

I disputed the damages on the spot and advised them that this was pre-existing.

In the meantime, I did contact Alamo’s member services department to let them know what happened and that I never received any documentation from the exit gate attendant.

Alamo sent her a $622 repair bill, but she say it did not detail any of the repairs or charges.

Now, if you’re sitting at my desk, and you see all of this — the apparent refusal to document pre-existing damage, the “gotcha” and the return and the bill lacking any documentation — you can almost hear the klaxons.

I contacted Alamo. A few days later, Mills reported back:

I received the phone call from Alamo yesterday. Alamo will be releasing the claim and that I would not be responsible for the damage.

I requested that a letter be sent to me stating that the damage wasn’t my fault and was told they were “99 percent sure” that the damage recovery unit would be sending one out since they have been contacted about the resolution of this issue. I can’t thank you enough for your assistance because clearly they were trying to take advantage of me.

But were they? A few days later, I heard from Alamo.

“As requested, we have reviewed the documentation again,” a representative told me. “However, the damage is significant — see estimate and pictures attached — and was not indicated on prior rental agreements.”

I’ve published one of the photos, above.

Alamo declined to drop the charges, according to the representative.

This set off another round of inquiries. Mills believed she’d have to pay the
$622, after all. Alamo didn’t seem to know what was happening with her case. I was confused.

It turns out that Alamo had sent the letter promising to drop the claim. Apparently, my initial inquiry had persuaded them to simply abandon a valid claim.

If that’s true, then I forced a car rental company to repair a vehicle one of its customers damaged, at its own expense.

I’ve reviewed the damage claim several times, and I’m not persuaded that Mills dented the vehicle. From some of the angles, it’s difficult to see the dents.

Mills’ case has weighed heavily on my conscience for the last few weeks. When you have the ability to contact any company and pressure it to offer a refund, drop a damage claim case, or even to just apologize, you have to use that influence for good, and not evil.

I have seen colleagues wield the power of the press in a way that’s completely wrong. I know there are folks on the other side of the counter who think I’ve done it, too.