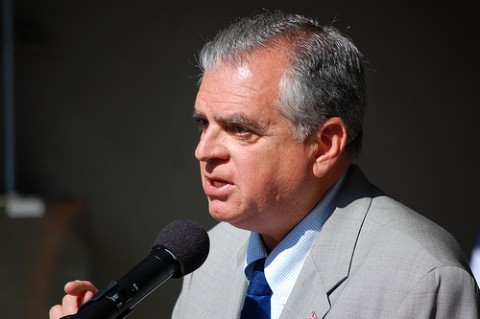 Spirit Airlines’ decision to begin charging passengers for carry-on luggage — and lowering some fares to a penny — has caught the attention of the federal government, as many predicted it would. In part one of our exclusive interview with Transportation Secretary Ray LaHood, we talk about fees, consumer protection and the future of airline service.

Spirit Airlines announced earlier this week that it would start charging passengers for carry-on bags this summer. It has also lowered some fares to one cent. I think it’s possible customers will think they’re booking a penny fare, only to discover that everything else is extra after they’ve made a purchase decision. Do you think that’s the way they ought to be doing it?

How should they be doing it?

I think they should fully disclose to people — either if they’re calling or if they’re looking at a computer screen — in a way that’s legible and clearly readable, so that if they are going to charge you, you board the plane and you put your bag above the seat, that whatever that charge is, people can see that.

This idea of trying to deceive people with some little amount of print that nobody can read, or somewhere tucked away, I don’t agree with that.

And we’re gonna hold the airline’s feet to the fire on this. Because we have an obligation to do it and we have the ability to do it.

I think it’s a bit outrageous that an airline is going to charge someone to carry on a bag and put it in the overhead. And I’ve told our people to try and figure out a way to mitigate that. I think it’s ridiculous.

Do you think Spirit crossed the line?

I don’t think they care about their customers. That’s what I think. And I think when you charge somebody to use the bathroom, you don’t care about your customers. I mean, it’s pretty clear.

That hasn’t happened here — yet.

No, but they’re suggesting it.

What about convenience fees — charging people to use their credit card? Allegiant Air does that now. DOT hasn’t stopped it.

I think if it’s not disclosed, it’s a real insensitivity to customers. I really do.

I think it should be disclosed on the phone or on the computer screen, when you’re buying the ticket.

When the fare is being quoted? So that you can make an informed buying decision?

That’s correct. I think trying to keep these things secret is not a fair way to treat people.

I’m sure you’ve been following the Menendez bill, which would require airlines to quote a total price on their tickets. Isn’t that the kind of thing your department can mandate in an administrative rulemaking?

So when you say you want to hold their feet to the fire, you’re talking about a rulemaking?

There’s one scheduled for release in June. Is that what you’re aiming for?

We have a rule in process, and all the things we’re talking about, they’re being considered.

We’re on this. Stay tuned.

Speaking of rulemakings, several airlines have asked for exceptions to your new tarmac delay rule, and they’re threatening to cancel flights. Any thoughts on that?

To me that’s a safety issue. And it’s a health issue. I can make the case for that.

I’ve read where they say, “We’re going to go back to the gate.” Fine. You know what happens when you go back to the gate? You can rebook your flight, you can go home and rest, and get on a flight the next morning. Or you can sit at the terminal, and make a decision.

You’re not cooped up in an airplane without food, water or a lavatory.

So I take it that airlines asking for exemptions are not going to get them?

Look, you know my philosophy on this. I don’t think I can say.

A lot of people have noticed a shift in the way the Department of Transportation has approached customer service issues in this administration. What’s going on?

I think we feel we have an obligation to the flying public, for safety. We want to make sure that when people get into a car, a bus, a train, an airplane, that it’s the safest it can possibly be.

But I know a lot about being a passenger. And how passengers are mistreated. And so, it’s a priority. A lot of us around here are passengers. I think there is a different philosophy. But it’s based around safety.

I wanted to ask you about codesharing. People say they’re confusing when their ticket has one airline on it but they end up flying on another. Do you think there’s adequate disclosure?

I think the idea that codesharing is confusing — I agree with that. I agree that when people really pay attention when they look at a computer screen, as they’re buying a ticket, [they’re confused].

Our obligation is to make sure that when people get a ticket, that the name of the airline is on there. What airline it is. I take your point on this. When I would board a plane in Peoria, I would see United Express on it, but on the ticket it would say Midwest. And unless you pay attention, you don’t know that it’s a different company than United Airlines.

So we do feel an obligation that there has to be truth in the purchase of a ticket. Truth in the amount of tax that you’re paying. Truth in who’s actually going to be operating the airline. So we have figured out ways to do that — not always recognizable by the flying public, unfortunately.

But when it’s called to our attention that there is not this kind of acknowledgment, we make sure the airline knows that. And if they’re not complying, we have ways to mitigate that.

This interview was conducted April 7, 2010. The questioners were Christopher Elliott, National Geographic Traveler’s ombudsman, and Charlie Leocha, president of the Consumer Travel Alliance.