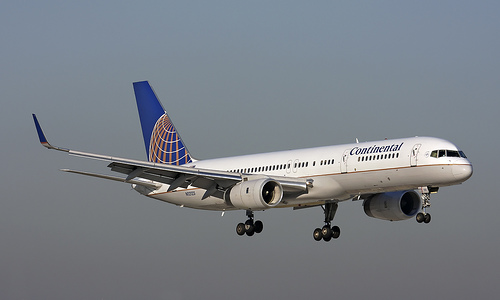 If you think customer service on U.S. airlines is a dying art — and especially on legacy carriers — you’ve probably been reading this site too much. And while it’s true that service levels have plummeted to historic lows, there are some exceptions.

I just experienced one this weekend.

I was flying from Orlando to Guadalajara, Mexico, via Houston on Continental Airlines. There were many opportunities for Continental to fail, from oversold flights to flying a dreaded regional jet into Guadalajara (a plane most people can’t even stand up straight in because of its low ceiling).

My travel agent had misspelled my name – “Elliot” instead of “Elliott” even though I had pointed out the error. The mistake prevented me from printing a boarding pass and caused my seats to be released by the time I arrived at the airport.

“You know,” the ticket agent said when I presented my passport and itinerary. “Your ticket name has to be an exact match.”

“That’s what I told my travel agent,” I sighed.

“Do you have anything in the exit row?”

She didn’t, but for less that two hours, any seat would be fine. At the gate, just a few minutes before boarding, a Continental agent asked me to come to the counter.

“We have your exit row seats, Mr. Elliott” he said. “Have a nice flight.”

Now here’s the thing: The paranoid part of me wonders if these employees recognize me. Do they have a notation in the reservation system that says, “WARNING: ELLIOTT IS A CONSUMER ADVOCATE. BE NICE TO HIM.” Or are they being nice because it’s what they do?

I arrived in Houston a little early and made it to my gate for the Guadalajara flight, only to find that there was an earlier flight that hadn’t left yet. I asked an agent if I could change my ticket, but was told the flight was probably full. No problem. It was a Saturday morning, and I didn’t mind waiting.

But as the flight boarded, another Continental employee motioned me to come on over, handed me a boarding pass and said, “Have a great flight.”

All along the way, there were other little things. Like the attendant on the flight to Mexico who lent me her only pen so that I could fill out my customs form. Or the genial crewmember on my return flight who served up hilarious one-liners with coffee.

I hear from passengers who are impressed with Continental. They tell me it may be the last great legacy airline. (A legacy airline is a carrier that existed before the federal government deregulated airlines in 1978.)

I think that may be true. Continental still serves meals on longer flights. Its business class product is one of the best I’ve experienced, although it’s been a few years since I’ve flown up front. From what I can tell, employee morale and service levels remain unusually high, considering the current malaise the airline industry finds itself in.

That’s not to say you can’t experience good service on another airline. But it isn’t as consistent as on Continental, at least if you’re flying on a legacy airline. You can count on similar service from airlines with great corporate cultures, like JetBlue or Southwest.

But on other legacies, it’s hit or miss. And if you’re the unofficial complaints department of the travel industry, you hear about the misses more of than the hits.

I have to say that even when Continental screws up, it’s quick to try to fix it. For example, last weekend it displayed a test fare on its site by mistake. Only a few minutes after receiving an email from a customer, which was also copied too Continental’s head of customer care, Anne Munoz, the airline had responded with a promise to look into the problem. Within 24 hours, it had been fixed, with no prompting from me.

The airline is far from perfect. Some of my inquiries on behalf of customers are ignored, while others are denied. And then there’s that monstrosity of an airport in Houston, with its confusing signage and golf carts that always seem to be on a collision course with you.

Still, given my recent experience on Continental, I think I would go out of my way to fly on the airline.