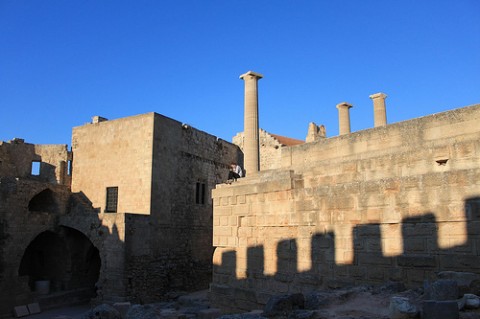 The tab for lunch at the Hatzikeli Fish Tavern in Rhodes, Greece, came to €219 for Siyun Kim. At least that’s what he thought.

But when Kim returned home from his cruise last June, he discovered someone had moved a decimal point. The restaurant had charged €2,190.

Good thing Kim put everything on his Bank of America card. Its cards offer total security protection that guarantee fraud monitoring and something it calls “zero liability” for customers.

Here’s what happened to Kim:

I was in a hurry when the charge slip came and I had terrible time with my vision because of my allergies. The bottom line is that I signed the credit card slip for €2,910 plus €45 for the tip, but lost my receipt for the actual bill.

When I found out that there was a mistake in my credit card charge, I contacted Bank of America for a dispute. But according to one of the reps in the dispute department at Bank of America, there is nothing they can do help me since I don’t have the receipt of the bill and signed the credit card slip.

Sigh. That’s some predicament. But Kim could still contact the merchant to resolve this problem, right?

I sent an email and faxed the copy of the credit card slip. There was no response to my email and I called again. I was told that the owner was aware of the situation because their bank notified him about the dispute.

On and off on the phone, I would call and was told that the owner was working on this problem. The last time I called, the brother of the owner told me that they were going to the bank the next day and I should not worry.

It has been four week since then and my credit card still has almost $4,000 balance because of this. It is difficult to call over there because the time zone is totally opposite of America and I work a lot.

Obviously, the Hatzikeli Fish Tavern should return Kim’s €1,971 immediately. And why shouldn’t Bank of America — which makes big promises about helping customers with fraudulent bills — help? I suggested Kim try a formal credit card dispute, but Bank of America turned him down.

So I contacted Bank of America on Kim’s behalf. Yesterday, I heard back from him.

I got a call from the assistant to the CEO of B of A yesterday. The bottom line is that B of A can’t do anything because I don’t have the actual sales slip and according to their terms, I am responsible for the charge because I signed it.

He went over their terms when there is a dispute and I already heard them. I felt like I was being lectured to.

He wanted me to understand that B of A tried their best to try to reach the merchant and resolve the issue. I felt like he only called to emphasize their effort on my behalf.

I think he was not happy that I involved you.

He tried to make me fee that I didn’t do my best to resolve the issue. He didn’t even look at my paperwork that was sent to the customer service. Is this the end for me?

Bank of America shouldn’t be lecturing its customers (if anything, it should be the other way around). Did Kim make mistakes? Yes, plenty of them. Always review your credit card receipt before you sign it and keep a copy. But Kim is right to feel abandoned.

If nothing else, maybe it’s time to switch credit cards.