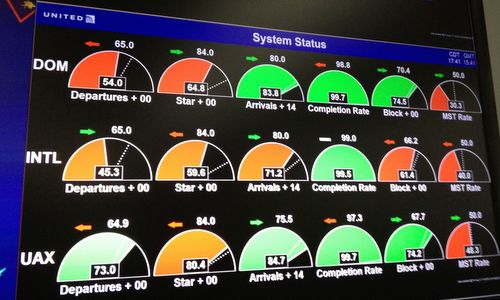 It’s hard to find anyone who likes the new United Airlines.

Even at United Airlines.

I spent a day touring the company’s new headquarters in Chicago last week, visiting with managers and executives who oversee customer service initiatives. Most of the meetings began with an apology and a promise: “We can do better.”

But can it? Can United, still wobbly after a difficult merger with Continental Airlines, right itself?

To answer that question, it helps to first understand how bad things are for United’s customers.

In the Transportation Department’s latest air travel report card, the airline recorded the most delays (only 77.2 percent of its flights were punctual). It had the highest rate of lost or mishandled baggage of any mainline carrier (3.50 per thousand). It bumped the most passengers of any major airline (1.73 per 10,000). In a single month, passengers filed 304 complaints with the government, more than twice the grievances of its nearest competitor.

I haven’t seen numbers like this since before US Airways merged with America West.

The stats are reflected by the stories United passengers tell me about ridiculously long delays, being mistreated by indifferent flight attendants, having their luggage lost, and being placed on hold for hours only to speak with someone who doesn’t have a command of the English language and can’t help them, anyway.

United, some critics and customers claim, is profitable thanks to a windfall of so-called ancillary fees ($5.2 billion worth of them last year) for everything from ticket changes to checked luggage. These extras, they say, have successfully transformed the world’s largest airline into one of the world’s least favorite airlines.

After a blog post in which I described a few of the remarkable things I saw at United, which was roundly criticized as a puff piece, I decided to ask readers if they thought United could straighten up and fly right.

Many customers told me the current problems are the result of a conflict between corporate cultures — on the one side, Continental Airlines, with a reasonably good customer-service reputation, and on the other side, United Airlines, which wasn’t exactly a customer favorite.

“If United adopts the customer service model and attitude of Continental, they’ll do fine,” says Charles Kolb, a million-miler on United.

If they don’t? Not so fine, Kolb predicts.

Paolo Castro, a United passenger who frequently travels between Boston and San Francisco, says practically everything is broken at the new United.

“Their pricing is usually $50 to $150 more than the competition,” he says. “Then they nickel-and-dime you with fees, which adds another $50 to $200 to the cost of the flight. The service is mediocre. There’s no Wi-Fi on the planes.”

Castro also says United’s CEO, Jeff Smisek, shouldn’t have accepted a $4 million merger bonus. “That bonus could have brought back a lot of furloughed pilots,” he says.

Liz Pollock, a corporate benefits administrator, in Wilsonville, Ore., is so fed up with the new United that she refuses to fly it anymore. The proverbial straw that broke the camel’s back was an incident last year, in which she was seated next to a paralyzed passenger and had to climb over him to get into her seat.

United’s crewmembers and customer-service were indifferent to her complaints, she says. They offered her a seat on the next flight the following morning and sent her a form letter when she complained.

“I find it hard to believe United can turn itself around,” she told me.

I’m also skeptical, but I believe the situation isn’t hopeless. United’s service managers openly acknowledged their problems and assured me they have a plan to fix it. For now, they’re working on the basics, like preventing delays and making sure you get a timely refund.

I came away with a sense that United’s managers in downtown Chicago are as exasperated as the customers who complain about the airline’s substandard performance, but for different reasons. If we passengers could only appreciate the complexity of running an airline, they say, maybe we wouldn’t be so quick to judge. If we could understand how difficult it is to merge two large airlines, we’d give them a break.

Maybe that’s why their apologies — and there were many — were also tempered with an odd but completely understandable sense of defensiveness. Passengers just don’t know what they’re up against, the managers suggest.

So can United get its act together? Maybe. I liked the folks I met in Chicago, and I believe they’re aware of the urgency of the situation and are up to the job.

But how soon can they do it? And will the improvements be enough, or will they just affect a chosen few super-elites in the front of the plane?

Passengers like Pollock and Castro have already stopped flying United. (Castro prefers newer airlines that can be a little obsessive about service, like Virgin America).