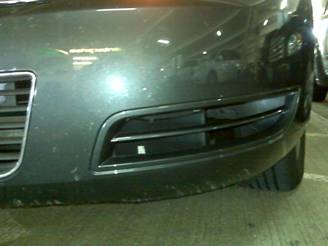 This is the front bumper of Jeffrey Scheid’s rental car in Reno. See anything? Yeah, neither do I.

But if you look at the bottom of the bumper, you’ll see “scratches” for which Enterprise is charging him an extra $500. Scheid is suspicious. So am I.

Before we go there, let’s rewind to when he picked up his rental three days earlier. An Enterprise agent inspected the vehicle before handing him the keys.

Never once did he get on his hands and knees and inspect under the car and neither did I.

The garage at the airport was dark, the car was wet and there were numerous bug splats on the front bumper and scratches on the rear bumper from luggage loading. The only thing noted was a door “ding” in the right front door.

One other curious thing in an effort to sell me coverage was that he asked me what my insurance deductible and who my car insurance carrier was. I have never been asked this by any company and I assure you will never give that out again. Doug noted that on my contract.

A few red flags are raised with this pick-up. First, the condition of the vehicle. Never rent a dirty car. Bug splats and dirt can conceal a lot of damage.

Second, the dark garage. I know, all garages are dark, but sometimes I wonder if they keep them that way intentionally to prevent a thorough inspection.

And finally, the question about Scheid’s deductible was too much. Why ask such a question if the agency didn’t intend to make a claim?

Sure enough, when he returned the car, he found another employee ready to finish the job.

The very first thing he did was get down on his hands and knees and inspect under the car. He pointed out scratches on the bottom of the left-side of the bumper.

I am an honest person and implored I did nothing wrong with the car. He said since the scratches were not noted in my contract that I would be responsible and would have to pay for them.

Enterprise charged his credit card $542 — $42 for the rental and $500 for his deductible — within minutes of returning the car.

“I never signed any document or received any document showing that a claim was going to be filed,” he says. “Evidently I should have been given a loss-damage report but that issue was never discussed and charges were made without my approval.”

I’m sure Enterprise will follow up with the right documents, eventually. It might be nice to get a repair estimate before charging him, though.

Here’s my problem with this case: If Scheid damaged the front bumper of his rental — even if he wasn’t aware of the damage — then he should pay for it. He says he parked the car carefully when he drove it, and I’m sure he did. But if the scratches weren’t there before he rented and were there when he returned them, he’s still responsible.

But he’s not sure. “Those scratches could have easily been there but not pointed out in the beginning,” he told me.

I’ve seen this kind of thing before. No one checks the roof either, by the way.

Still, the odd experience when he picked up the vehicle makes me wonder if the good folks at Enterprise in Reno aren’t pulling a fast one. Here’s how Enterprise should be handling claims, according to its executive in charge of damages.

Is it following its own rules? If not, should I get involved?

Update (11:30 a.m.): This has been fixed. Scheid appealed to Enterprise’s executives, and they issued a refund.