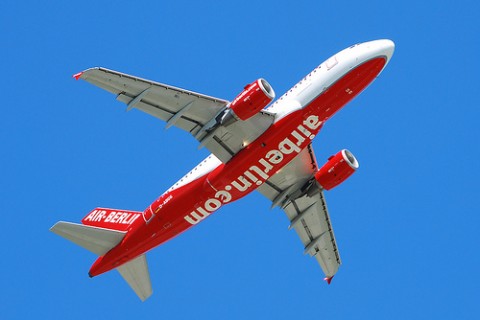 Luggage fees are a quick and relatively easy way for an airline to make money, but the European discount airlines have turned it into an artform.

If your carry-on tips the scale a few grams over the limit, the price of your air transportation can routinely double, thanks to their punitive and arbitrary baggage surcharges.

Nicholas Dominick recently found himself on the wrong side of that scheme when he flew from Venice to Münster, Germany, via Berlin on Air Berlin. Knowing the airline’s strict luggage policies, he’d weighed his luggage and it added up to a total of 40 kilos.

“However, when we got to the check-in counter, the agent, who was unbelievably unpleasant, said the scale showed our total weight to be 48 kilos, and she wouldn’t let us check in unless I paid an additional 120 euros,” he says. “There was very little time before the flight, and the agent didn’t seem like they would be very helpful anyway, so I paid the fee with cash and we left to board the flight.”

But then things got a little more interesting. He explains,

As we were boarding the flight, another passenger approached us to say that he, too, had been overcharged by the same agent. He had weighed his bags prior to getting to the airport and they were 4 kilos under the 40 kilo limit, but the check-in lady said his bags weighed 44 kilos and charged him an excess baggage fee as well. Clearly, the scale that this agent was using was calibrated incorrectly.

It got worse. Air Berlin had incorrectly tagged their luggage, and their belongings were lost for almost a month. In other words, the airline had charged them extra and then lost their suitcases — a “bad experience,” says Dominick. (That’s putting it nicely.)

I assumed that his polite, written inquiry to Air Berlin would yield a prompt explanation about the scales in Venice and at the very least, a sincere apology for losing his belongings. Air Berlin also should have covered some of Dominick’s expenses while his luggage was lost.

But two months later, and several emails between Air Berlin’s North American office later, he didn’t have any kind of meaningful response from the airline. That’s when I decided to step in to help.

I contacted Air Berlin’s North American office on his behalf, and asked if they could help get an answer. The response? We don’t handle customer complaints from this office.

But they forwarded Dominick’s file to the main office, which eventually responded:

We are sorry we disappointed you in so many ways. Thank you for taking the time to share your comments with us.

We would like to extend to you our regret and sincere apologies for the inconveniences caused.

Our records show you checked in three bags weighing a total of 48kgs. Please note that all scales are calibrated and inspected on a regular basis. Against this background, we regret a refund of the excess baggage fee is not possible.

We would also like to apologise for the disruption of your service to Münster and subsequent delayed baggage delivery. For further assessment, please submit all original receipts of additional costs incurred by the service and baggage delay. Kindly include your bank details (SWIFT code, account number).

In addition, as a gesture of goodwill, we would like to grant you a discount of 150,00 € on your next reservation with us for a flight with airberlin, Niki or Belair.

At this time, please once again accept our most sincere apologies for any inconvenience caused. Thank you for bringing these occurrences to our attention and for giving us the opportunity to review them.

Dominick is unhappy with the airline’s response. He calls the luggage scales a “scam” and believes Air Berlin’s apology is insincere.

A look at its contract of carriage (PDF) suggest that it might be lowballing him.

Baggage delays: In case of baggage delay, the air carrier is liable for damage unless it took all reasonable measures to avoid the damage or it was impossible to take such measures. The liability for baggage delay is limited to 1 131 SDRs (approximate amount in local currency).

But we won’t know the answer until Dominick submits his receipts.

“The more I learn about Air Berlin,” he says, “The more I wished I had never flown them.”