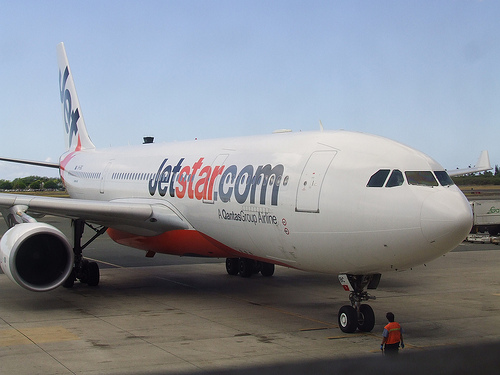 Jetstar Airways is an Australian discount airline that began flying between Sydney, Melbourne and Honolulu in late 2006. The Transportation Department requires the airline to file an annual report detailing disability-related complaints, which it did for 2007 — this January.

From the consent order, which was sent Oct. 17.

Therefore, Jetstar violated section 382.70 and the ACAA when it did not submit its report detailing disability-related complaints that it received in calendar year 2007 on flights originating or terminating in the United States in a timely manner.

What does Jetstar have to say for itself?

Jetstar notes that 2007 was essentially the first year for which Jetstar owed a report of disability-related complaints. Jetstar explains that as a new entrant to the U.S. market, its failure to file the report for 2007 was a one-time administrative oversight. Jetstar states that it has now implemented procedures to ensure the timely filing of future reports.

The DOT isn’t buying it. It socked Jetstar with a $30,000 fine, half of which will be forgiven if it doesn’t repeat. The Feds say it could have been worse:

Since Jetstar operated to and from the United States for the last 6 days of 2006, it should have also filed a disability-related complaint report for that year by January 29, 2007. It did not; however, because of the short period of time in question and the action being taken here, separate action will not be taken regarding the required 2006 report.

So what’s going on here? I think the department doesn’t want to appear soft on airlines that break the rules, no matter how small the rule — or the airline.

I have a feeling there’s more to come. Lots more.