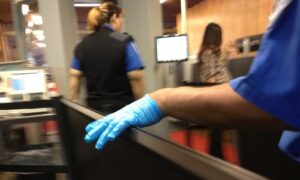 Next week is one of the busiest of the year for air travel. And the last thing you probably want to see at the airport when you fly home for Thanksgiving is a long line — especially one that’s preventable.

But this year is different.

This Thanksgiving, I’m telling the TSA agents who screen me that I won’t walk through their full-body scanners.

And I’m not alone. A group of activists who are concerned about the so-called “advanced” imaging technology are also urging air travelers to just say “no” next week.

Opting out means agents will either give you an “enhanced” pat-down or wave you through the screening area (and when there’s a long line, it’s a safe bet it’ll be the latter). But the peaceful protest will also slow screenings to the point where the agency will have to reconsider the way it checks air travelers, as it did during a successful opt-out action two years ago.

A sustained protest could kill the scanners.

If you’re one of the millions of Americans who fly, and don’t think there’s anything wrong with getting a full-body scan, let me offer a few reasons you should reconsider.

1. They’re not adequately tested and could be dangerous. Unfortunately, the scanners you’ll be asked to walk through haven’t been properly tested. The latest independent evaluations are actually based on data provided by the TSA. The government wants us to trust it, but it won’t give us a reason. That’s unacceptable.

2. They’re easily foiled. It’s not difficult to sneak a weapon through a full-body scanner,  according to several reports. The career criminals who might want to do us harm have figured out how to get around the scanners already.

3. They’re too expensive. At a quarter of a million bucks a pop, the scanners are a huge waste of taxpayer money. To use one, or to allow one to be used on you, is is an endorsement of an iffy technology. It also lines the pockets of undeserving security contractors, say critics.

4. They probably violate your constitutional rights. Beyond the fact that they are nothing more than an overpriced visual deterrent to amateur terrorists, the TSA’s scanners are constitutionally problematic. The Fourth Amendment’s provisions against unreasonable searches are directly at odds with the way these scanners are deployed and used.

5. They haven’t caught a single terrorist. Sure, they’ve netted plenty of contraband, which the TSA likes to show off weekly on its blog. But so far, not a single airborne jihadist has been caught with the scanners. Not a one.

National Opt-Out Week is a good start, and it comes on the heels of the TSA’s humiliating withdrawal of its most controversial full-body scanners from major airports: the risky “backscatter” X-ray machines.

But in order to end the warrantless scans for good, we need to stand up at the same time and say “no” even after Opt-Out Week ends.

We need to do it until the TSA changes the way it screens us.