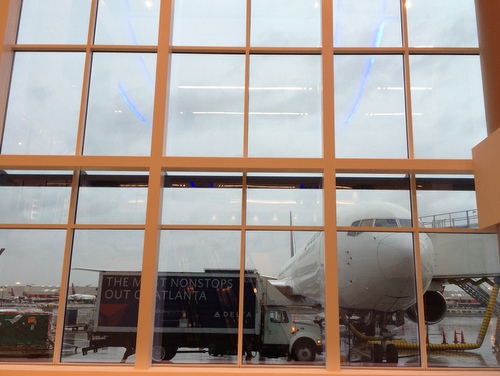 This is the new international terminal at Atlanta’s airport. It’s an architectural masterpiece that echoes Eero Saarinen’s iconic Trans World Flight Center in New York and reminds me of the golden age of flying. It was my final stop on a recent one-day visit to Delta.

Here are a few other things that fascinated me. 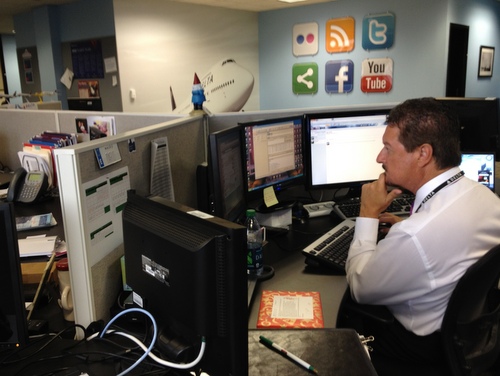 The social media lab on Delta’s campus. Every day, 3,100 tweets sent to @DeltaAssist are fielded through this office. It’s staffed around the clock by a team of 16 employees, who are recruited from Delta’s call centers and given a three-day crash course on social media. Jerry Fletcher, Delta’s manager of reservation systems and social media, says the department has evolved into a team that can “do anything” for a customer. 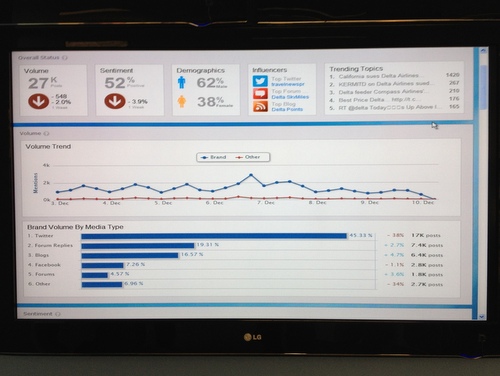 The airline pays close attention to who is saying anything about it in the blogosphere and social mediasphere. Look closely at this screen on the lab’s command center wall, and you can see where the action is happening. Twitter mentions at the top, followed by forum replies, blogs, and Facebook. I visited the lab on a Monday morning. Execs tell me that these numbers shift based on the time of day and day of the week. Oh, and in case you were wondering, they reply to virtually every shout-out — even the ones sent using the default “egg” avatar on Twitter. Once they know who you are, they also match your SkyMiles account to your avatar. Pretty clever. 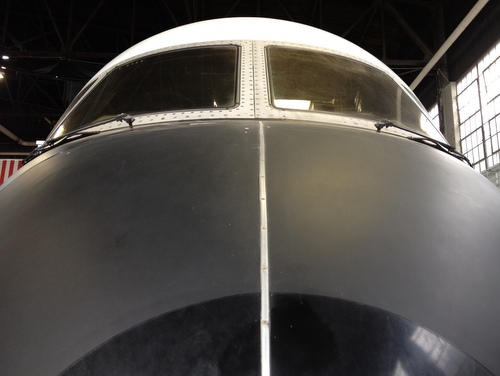 The nose of the very first Lockheed L-1011, which is now a gift shop for the Delta Air Transport Heritage Museum. After you’ve stocked up on memorabilia, you can visit the flight deck and get your picture taken. No, I did not have my picture taken in the cockpit. I’m not an aviation geek. OK, maybe just a little. This is a good time to visit the museum, by the way. Tiffany Meng, the museum’s director, told me the two hangars are getting a big makeover starting this spring, and the facility won’t reopen until the following year. 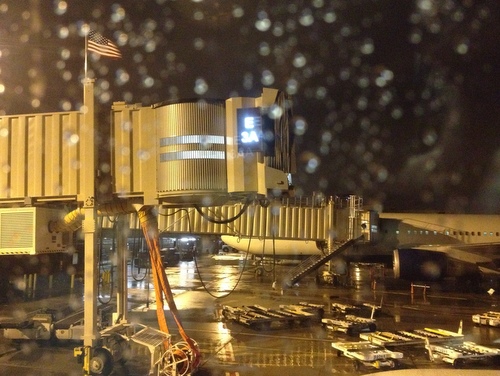 Here’s the view from my seat on my flight back to Orlando. I had a lengthy interview with Allison Ausband, Delta’s vice president for reservations sales and customer care, and she told me about some of the contingency plans for “IROPs” — airlinespeak for irregular operatons. A wave of thunderstorms smacked into Atlanta just before I returned to Orlando, so I had a firsthand opportunity to see why Delta’s DOT complaints have fallen off a cliff in the last few months.

Bottom line: it’s happening for a lot of little reasons, including empowering employees to fix a problem (no more “no waivers, no favors”) new reseating programs that ensure you’ll get a comparable seat assignment when there’s an equipment change, and little personal touches, like getting pilots to make delay announcements. “I have a feeling we’re getting better,” Ausband told me. “But we’ll never be satisfied.” (My full interview with her will appear shortly.)

My flight was delayed by about 20 minutes, but considering that the two previous flights to Orlando were canceled, forcing Delta to switch to a larger aircraft, and they were dealing with weather and heavy air traffic, I think they did remarkably well. Beyond that, the gate agent’s explanation and apologies came off sounding sincere, which is a welcome break from other legacy airlines whose employees sound anything but nice when they make those announcements. And you know exactly what I’m talking about.